Cassandra Frechette, came to Vancouver, BC at the end of 2018 after working as a Script Supervisor in Toronto and other parts of Ontario for a decade. A full member of IATSE 891 in British Columbia, Cassandra has trained with and TA’d for Daniela Saioni’s Script Supervising Intensive in Toronto. With a “Go Team!” attitude, and a passion for the filmmaking process, Cassandra considers herself a story based Script Supervisor.

She cares deeply and works closely with the director, and the rest of the team, to ensure that everything is covered satisfactorily and all the needed beats are there to be pieced together in the edit suite.

Cassandra has been using ScriptE since the beginning of 2017 after a training seminar with NABET Script Supervisor, Melanie Orr. Cassandra is also proficient in the old school paper method, and has a customizable non-Script E digital method and is happy to adapt her process to make sure you have everything you need going through post production.

Swing over to the work samples and templates page to check out the customizable template forms. Please contact me if you would like a copy of any of the blank, editable templates.

Cassandra is currently based in Vancouver, BC. 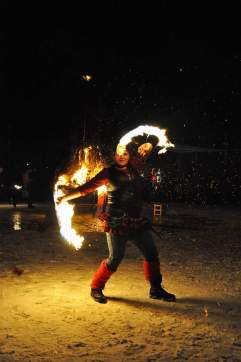 On a different note, Cassandra is also a hobby fire spinner, specializing in fire fans and fire staff, and a spinner of non-fire items like hula hoops and LED Fans. She has performed in a variety of community and street festivals in Toronto, including the Red Pepper Theatre’s Festival of Lights in Kensington Market, Dufferin Park’s Night of Dread, Kensington Markets’ Pedestrian Sundays and a variety of other not-for-profit endeavours. Cassandra has also performed in past seasons of Toronto’s Lunacy Cabaret.

Wanna know more about Cassandra as a person? Check her out on Twitter: @candddragonfire

Other Cool Things/Places You Can Check Out That I Support/Endorse: